Airmail is a great application -- being very happy with Gmail's in-browser UI, it's honestly the first e-mail desktop client that I ever felt even remotely tempted to use. It has:

Especially that last feature almost got me sold -- you see, I like my e-mail hardwrapped (what Emacs calls "filling paragraphs"), because most of the time, I view it on monitors that are too wide for soft line wrapping to achieve a comfortable text width.

(By the way, Airmail's layout deals with this issue very elegantly, but I know I won't be using only Airmail. Plus there are the obvious netiquette issues -- lines "should be" wrapped at 72 characters etc.)

In Gmail, I therefore use plain-text compose, which is fine for the purposes described above, but frustrating whenever you want to apply formatting (obviously, you can't -- it's plain text). I tried using the usual replacements for formatting like stars & co., and I don't know about your grandma, but mine certainly doesn't take *...* to mean emphasis.

I thought the Markdown compose mode in Airmail would solve my problems -- I could apply formatting if and when I wanted (using the frankly more streamlined process of typing it in rather than fumbling around for the right button in the GUI) and fill my paragraphs, because I somehow automatically assumed there'd by a hard-wrap feature like in any decent editor (read: emacs or vi). Markdown is plain text after all, isn't it?

Long story short, as of yet, there isn't. There isn't even one for the plain-text compose mode, as far as I'm aware. So I added my two cents to this feature request thread and went back to the Gmail in-browser UI.

But then I realized (it took me a while, I'm still very much an OS X newbie):

With that in mind, you can have hard-wrapping in Markdown or plain-text Airmail compose at your fingertips in no time flat. If you don't have homebrew, start by installing that (or any other ports manager that will allow you to install par; I'll assume homebrew below) by pasting

at a Terminal prompt. Then:

At this point, your service should look something like in the screenshot below: 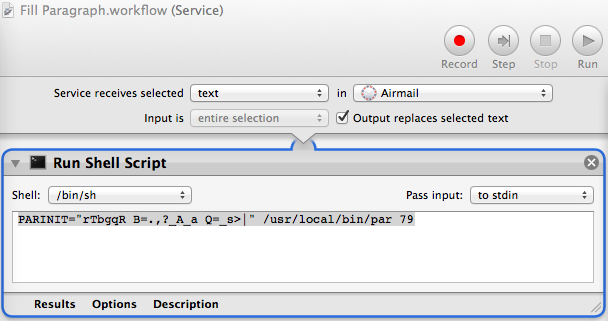 Save it, open Keyboard preferences (type "Keyboard" into Spotlight), navigate to Shortcuts → Services → Text and set a keyboard shortcut for your newly created Service, e.g. Cmd+Opt+P. Next time you compose an e-mail in Airmail, just select the entire text when you're done (Cmd+A), press Cmd+Opt+P, and voilà! Your lines have been hardwrapped, your paragraphs filled :) (Same thing, I know.)

If the shortcut doesn't appear to work1, try fiddling around with it, resetting it (maybe the one you've chosen conflicts with a pre-existing one?), restarting Airmail, logging out and back in, rebooting... The custom shortcut part is unfortunately the least reliable aspect of this whole setup. Automator is a great idea, I was pleasantly surprised by it when I started using OS X a few days back, but it could seriously use some bug-squashing.

If you fail miserably at getting the shortcut to work, you can still access your fill paragraph service via the menu (select the text you want to hard-wrap, then navigate to Airmail → Services → <name of your fill paragraph service>). Clicking around in a GUI is tedious (though hey -- it's the Apple way after all, isn't it?), but it shouldn't be too much of a bother since you need to do it only once per e-mail.

Bottom line: I am now officially completely sold on Airmail (even bought the released version instead of using the free beta) and look forward to the joy of using it!

EDIT: In order to have the least trouble possible getting the shell script up and running as a Service, two rules of thumb: